Some people watch the Super Bowl just to see the multi-million dollar commercials. As for me, I am an avid football fan so I enjoy the part with the green grass and shiny helmets. I like the commercials as much as the next guy though, especially the ones that make me laugh.

During the big game last Sunday, a commercial for CocaCola aired, featuring a multilingual rendition of the song America the Beautiful:


Seeing the smiling faces of these our brothers and sisters in the human family and hearing their voices raised in a song of patriotic gratitude, brought a tear to my eye... for more than one reason.

The primary reason this music touched me is because it is a fitting tribute to the cultural diversity of our great nation. America is an amazing place, full of amazing people who have come here in search of freedom, safety, and happiness. This video reminds me of the ideal represented by the Statue of Liberty. There is an historic plaque at the base of the statue, which bears the following inscription:


Not like the brazen giant of Greek fame,
With conquering limbs astride from land to land;
Here at our sea-washed, sunset gates shall stand
A mighty woman with a torch, whose flame
Is the imprisoned lightning, and her name
Mother of Exiles. From her beacon-hand
Glows world-wide welcome; her mild eyes command
The air-bridged harbor that twin cities frame.
"Keep, ancient lands, your storied pomp!" cries she
With silent lips. "Give me your tired, your poor,
Your huddled masses yearning to breathe free,
The wretched refuse of your teeming shore.
Send these, the homeless, tempest-tossed to me,
I lift my lamp beside the golden door!"

This quote comes from the sonnet, New Colossus, by Emma Lazarus; which she wrote for a fundraiser auction to raise money for the pedestal upon which the Statue of Liberty now sits. Take a moment to appreciate the true meaning of each phrase of this eloquent prose-- it is our nation's heritage; a legacy that must be preserved; a philosophy worthy of having a statue erected in it's honor.

Joseph Pulitzer (of the Pulitzer Prize) believed in the Statue of Liberty project so much, he opened up the editorial pages of his newspaper, "The World" to support fund raising efforts.

The second reason seeing this Super Bowl ad brought a tear to my eye is because I knew immediately that some people would reject the heart-warming sentiment of it's message, purely because those in the commercial were singing in their native language, some wearing the traditional garb of their culture.

Sadly, it didn't take long for my prediction to come true. One sample of what could be found spreading across social media like a wildfire the next day: 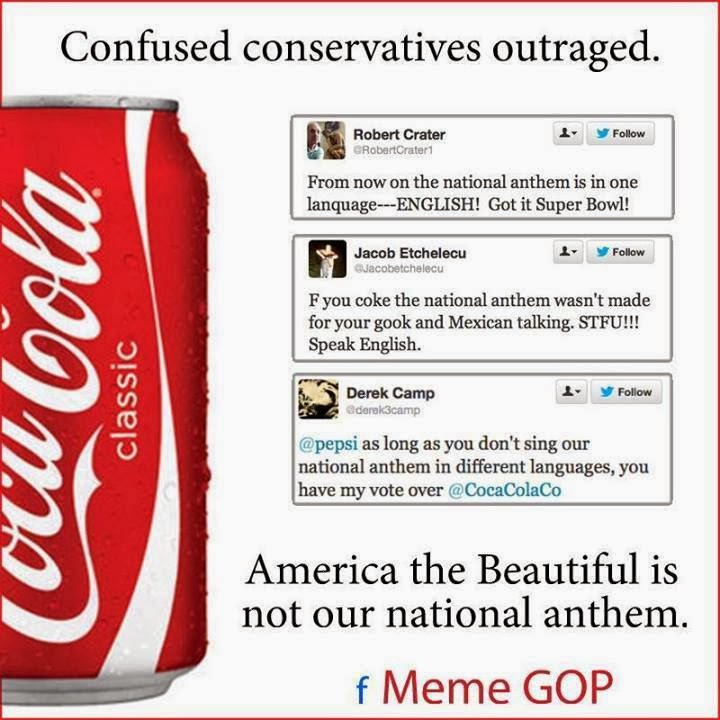 Is it just me, or is it incredibly ironic that one of those guys has a last name so ethnic, I honestly can't pronounce it? These individuals make me wonder how many people recall that everyone in the United States who is not of native American decent, comes from immigrant roots at some point. So it turns out that maybe their attitude is not so much narcissism, as it is self-loathing. Weird.

And remember the Statue of Liberty I was just talking about? It was a gift from France. Perhaps the most iconic representation of American idealism (other than the flag, and the constitution itself) was made in France by French speaking Frenchmen. When sculptor Frederic Auguste Bartholdi, and engineer Alexandre Gustave Eiffel (designer of the Eiffel Tower) were over here helping us put Lady Liberty together, guess what they were doing? Speaking French on American soil... GASP!

I lived on the east coast for a while, and one of my favorite things about living there was how you could randomly come across entire neighborhoods full of Italians, or Greeks, or Jamaicans; it was awesome. The variety of people, cultures, and cuisine was really fun to be around. I had a great time getting to know so many cool people while I was there.

Ignorance of America's immigrant heritage is one thing, hateful intolerance is another. Ignorance can be remedied with education. Intolerance is much more difficult to correct... especially if it has become culturally entrenched. In addition to those racist tweets, the caption at the top of the graphic is an unfair assumption. Despite the recent history of some Republican politicians publicly issuing some rather cringe-worthy statements, the individual who put this graphic together could have done so without making further judgements about who those twitter users are, beyond the obvious bigotry present in their messages.

The more I hear the popular political narratives people are constantly repeating, and the more I observe the way we treat each other on a day to day basis in our society... the more I think we need to be careful about how far we take our ideological debates. My heart sinks at the thought of how cruel some people still are to anyone who doesn't look like them, or sound like them. I find it genuinely frustrating to see unmitigated racism on display right here in the land of "The American Dream".

On July 4th, 1776, the United States Declaration of Independence proclaimed:


We hold these truths to be self-evident, that all men are created equal, that they are endowed by their Creator with certain unalienable Rights, that among these are Life, Liberty and the pursuit of Happiness.

So anyway, we need to pay careful attention to the messages we spread. Once you release an idea into the wild, you can no longer control the effect it has. We live in the information age, it would be easy to take for granted the tremendous power of communication that present day technology affords us.

We each have the power to choose what kind of karma we are going to put out there into the universe. We can choose to look for the beauty in life, instead of finding reasons to indulge selfishness, judgement, and discrimination. We can choose to live by the golden rule.

The world is a wondrous place, full of wonderful human beings; it would be a shame to look right past the smiling faces who truly make America the beautiful place that it is.

Peace Is A Choice!